Unless you are a big fan of 11 and under baseball, you don’t know Tony Lujan. Allow me to introduce you. Back in the day, Tony was a starter on the Sarasota High School national championship team (1989). A son of first generation Cuban immigrants, he never pursued a post- secondary baseball career, as he needed to place his emphasis on school and employment.

Years later, I had the privilege to play Sarasota county men’s league softball with him. He was easily the best all-around player in the county, because he could do everything well, a true “ five tool” player, as they say. He hit bombs from both sides of the plate, a la Mantle, possessed a rocket arm like Clemente, and a glove like, well, you get the idea. Hitting immediately behind Tony in the batting order was like singing karaoke after Sinatra.

But there was no detectable ego, it was all about two things-hanging with the guys and having fun. Sure it was nice to win, but he didn’t revel in that nor brood after losses. He was unquestionably “the man”, but had more fun just being one of the guys.

Skip ahead 15 years when Tony became the coach of his son’s , Trevor, baseball team for the nine and under league. A mini Tony, Trevor hits like a shrunken Aaron Judge and is currently ranked in  the top ten for pitchers in the entire country, for boys his age. But Tony won’t let Trevor develop an ego, as it’s about learning life (and baseball) skills, and it’s about team. Oh, and did I mention that this team-Prime Baseball Lujan, they’re called-  has amassed a record of 99-9, 122-1, 97-6 and were ranked  number one in the country for all three of his seasons? To borrow from today’s nomenclature, those numbers are “sick”, and eclipse the records of Wooden’s UCLA Bruins, Jordan’s Bulls, or Brady’s Patriots. Even the incredible Coach Faulkner of Venice High School doesn’t sport a winning percentage like this group of munchkins.

But ask Tony, and that’s not what this is about, he contends. Baseball is only “the vehicle”, to drive home important lessons for the bigger game, you know, life. That is, through this child’s game he can teach adult lessons, including goalsetting, teamwork, coping with adversity and loss, perseverance, sacrifice, accountability, commitment, preparation, and the pursuit of $40 million per year contracts. (Sorry, I may have added that last objective myself).

But how exactly does a child of that age learn all of these valuable life lessons, you ask? “We emphasize setting goals”, says Lujan, asking his ball players, “ Why are you here? What are your goals? Are you here to make your parents happy? Is there something you want to learn? Something you want to achieve? “

He teaches commitment, submitting the challenge “Are you willing to pick up a bat and swing for 15 minutes each day? Commit to running and exercising? Practicing backhanding groundballs? Throwing to a first baseman, regularly, even in the Florida heat?”

Lujan emphasizes preparation, especially knowing what to expect and what to do in any given situation. Obviously, that pertains to the rest of life, eg, are you ready when it’s your turn to present to your class, fill in for the boss, provide CPR to the driver in front of you? Will you be ready?

Accountability – the ability to take ownership of one’s behavior as an integral part of the greater whole (team)-is another of Lujan‘s principles. Did you give your best to the team today? Did you leave your “all” on the field? Or, borrowing from the legendary golfer Tiger Woods, did you bring your “A game”today?

But there’s more. Sure, you’ll make mistakes. We all do. That isn’t the issue. But what do you do with a mistake? Do you sulk in self-contempt and pity, shattered like a dropped vase? Or do you apologize, learn from your mistakes and aspire to do better? Mistakes are the best of life‘s opportunities to learn important lessons, according to Lujan.

What about fun? How does all this self-discipline lead to a good time for the youngsters? “Oh, we are always playing games, hitting games, fielding games, whatever. But their hard work yields success.” And success, he reminds me, creates lots of fun. Ever see a kid hit a home run who wasn’t smiling from ear to ear while circling the bases?

“So with this kind of success, how many of your boys are headed to the major leagues?” I ask, half tongue-in-cheek.

“I don’t even think about that,” says Lujan. “I hope they can play in high school, maybe some of them beyond. But the lessons they learn at this time of life, we hope they will value forever.”

Sort of reminds me of a T-shirt that was popular years ago: “Baseball is life“. But then again, so is gymnastics, volleyball, band, lacrosse, student council, etc. The particular vehicle is less important than the journey to develop life‘s necessary skills and lessons. 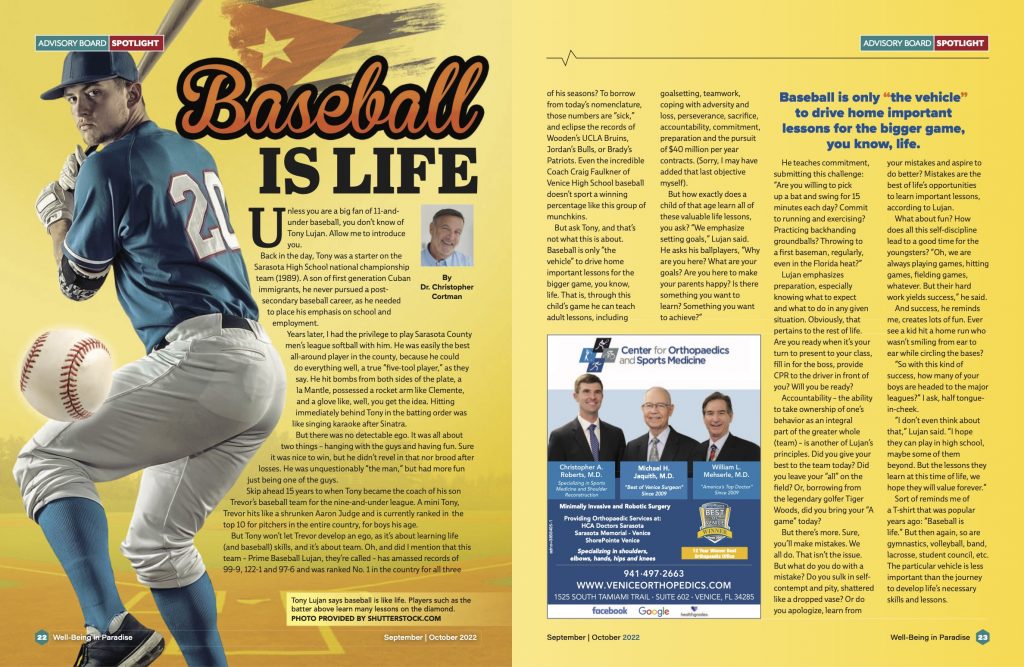