If you are brave enough to watch the news every day, you are exposed to a Lazy Susan‘s rotation of tragedies, one after another: rapes, life-consuming fires, political crime, murder/homicides, motor vehicle accidents, terrorism and mass shootings. And just in case you come up to catch your breath at a commercial, you will be exposed to Sarah McLachlan singing, “In the arms of an angel“, while you witness images of undernourished kittens and abused puppies, just to ensure that all of your sad emotions have been tapped for the evening.
It’s painful to watch the agony and horror on the faces of the bereaved and traumatized. Ever wonder what happens to them after their 15 seconds of public horror?
Science is beginning to shed some light on how trauma affects humans immediately and in the long term. In fact, we now have research on how trauma impacts children, thanks to some innovative research inspired by the school shootings in Newtown, Connecticut.
Allow me to introduce a new concept to most readers: an adverse childhood event (ACE) is any event that is deemed to be terrifying, horrible, distressing or traumatic to a young person. The Center for Disease Control (CDC)-Kaiser Permante Adverse Childhood Experiences study measures 10 different types of childhood trauma, including physical abuse, verbal abuse, sexual abuse, physical neglect and emotional neglect. The other five types of traumas measured are related to a family member, including an alcoholic parent, a parent (usually a mother) who is a victim of domestic violence, a family member in jail, a family member with a diagnosed mental illness and/or a family experiencing divorce.
One point is assigned to each of these experiences, although needless to say, verbal abuse, for instance, is rarely a one time incident. Still, the research is very clear: unlike poker, the more aces you accumulate, the greater your chances of experiencing significant issues. Let me share some examples of such, borrowing data from a research team led by Harvard neuroscientist, Martin Teicher and Harvard pediatrician, Jack Shonkoff. These researchers found that “toxic stress damages the structure and function of a child’s developing brain.“
Further, an overload of stress hormones (especially cortisol) interfere with school learning, developing trusting relationships with adults and/or peers, and contribute to isolation and loneliness. (Isolation is now considered to be “the new smoking,“ taking as many as 15 years off of one’s life span.)
These children often become burdened with anxiety, depression, guilt and shame, and have trouble focusing. As a result they are more likely to turn to bio-chemical solutions to their problems, including marijuana, alcohol, nicotine and methamphetamines (crystal meth).
It is notable that these bio-chemical methods are successful in the short term, as alcohol relieves anxiety and nicotine is remarkably effective in reducing anger and depression, as well as improving one’s focus.
High-risk behaviors may also follow an accumulation of ACEs /Childhood trauma. These behaviors may include a “proliferation of sex partners“ or high-risk sports/activities.
Suicide attempts, according to the research, are significantly higher, as one study found that 19% of people with four or more ACEs attempted suicide, compared to only 1% of people with 0 ACEs.
The evidence-based bad news continues: four or more ACEs statistically significantly increase a person’s chances to have had intercourse by 15, experience pregnancy as a teen and suffer serious financial problems and/or serious problems performing their jobs later in life.
Alcoholism, once thought to be a byproduct of genetics, is now understood to also be correlated with trauma. To wit, as many as 16% of adults with four or more ACEs are alcoholic, while only about 2% of adults with 0 ACEs are so afflicted. Likewise, depression is dramatically influenced by childhood trauma. Almost 60% of women and 35% of men with four or more ACEs were diagnosed with chronic depression, as compared to about 17% of women and 10% of men with 0 ACEs.
There’s more-higher ACEs also mean higher perpetrators of domestic violence, and increases in smoking, liver disease, heroin abuse and, amazingly, higher chances of being raped as an adult.
I’m sure you’ve noticed a pattern here: virtually all addictions, compulsions and self-destructive behaviors are significantly higher when trauma dominates a child’s life. In fact, according to “Stephen Scharfstein, former president of the American Psychiatric Association, “Smoking is to cancer as trauma is to addiction.“
But take heart, a handful of ACEs can still be defeated. In part two of this article, I will share the research on how to combat the issue of helping a world full of traumatized children.
Credit for this article goes to Drs. Vincent Felitti and Robert Anda, cofounders of the ACE study, in “THE Hidden Epidemic: The Impact of Early Life Trauma on Health and Disease) 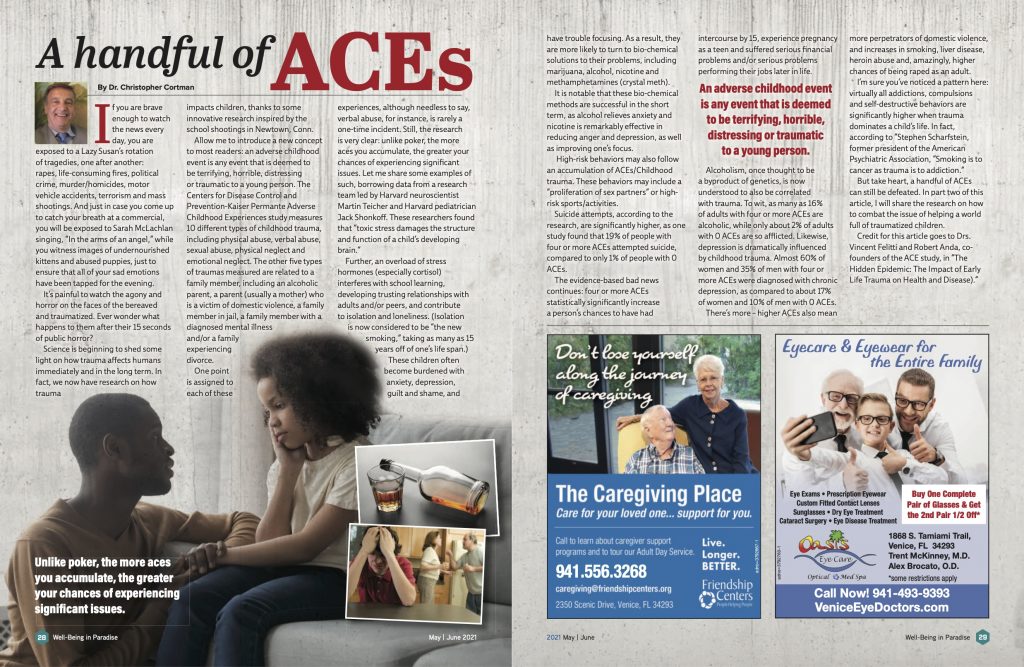