A child’s father leaves home and takes up with another woman and her family, leaving the child to feel abandoned, replaced, hardened.

A man is encouraged to resign from his job after 26 years of service. His lack of technical skills makes him feel like a dinosaur in a world of robots and artificial intelligence.
A woman’s only son is diagnosed with a severe case of bipolar disorder. He has been hospitalized four times, all but solidifying the notion that he will probably not complete college any time soon.
I can recite dozens of similar stories; they’re not unusual. Frank Sinatra sang a song in the 1960s that depicts the struggles of living called, “That’s Life”. His lyrics suggest that life repeatedly knocks him down, but… “I’ve been up and down and over and out, and I know one thing. Each time I find myself flat on my face, I picked myself up and get back in the race.”
What ol’ blue eyes from Jersey (Frank, not me) is describing, is what psychologists today call resilience, the easiest and most user-friendly definition being the ability to bounce back. Yes, life repeatedly trashes our dreams, our loved ones, our health and money – some more than others. But resilient people seem to get back up and, impressively, emerge from the rubble stronger, more resolved, somehow better off having absorbed the blow and survived it than before life unloaded on them. That’s resilience.
Do you remember the seven seas from geography? Resilience can also be defined by seven C’s: Confidence, competence, control, connection, character, contribution, and coping. Nice words, self explanatory, great concept. But it’s not as if our children are born with these characteristics. Like batteries, they are sold separately and at least for now cannot be digested in chewable, gummy supplements. Our children must be taught these concepts and skills because they will not be absorbed by osmosis. They  won’t get them from your experiences, anymore than they’ll know Spanish because their maternal grandmother is fluent. Children must be taught to master the seven C’s, like they must learn a backhand in tennis, the “Ode to Joy” on the piano, or solving a quadratic equation. (I know this because I haven’t mastered any of the above, despite living more than six decades)
So why should we assume they’ll understand their emotions? Most often, they won’t. They will marry foolishly, because they’ll feel “love”, which in many cases is really born out of the attention paid to them by a mysterious stranger. They will “fall out of love” sometime later, when their perception of that not-so-mysterious stranger changes.
They will feel anxiety and learn to self medicate it with chemicals, obsessions, escapes and dissociations. They will feel great emotional pain, but will be taught that time heals all wounds – a myth that is still taught by well-meaning instructors – instead of how to actively grieve, feel, express, release and reframe traumas and losses.
Likewise, they will learn to avoid situations that are linked with uncomfortable feelings and emotions, because that’s what humans do. From birth until death people will avoid discomfort because avoidance leads to temporary relief, which feels far better than anxiety. Unfortunately, running from anxiety and fear also serves to increase the perception of threat, so the next time the same situation arises, the child is even more likely to avoid facing the situation. This of course leads to a vicious circle of stimulus-producing anxiety, leading to avoidance and then relief. Eventually, the avoidant child cannot face school, public speaking, social situations, meeting strangers, talking to attractive peers, etc. All challenging situations produce anxiety. Without proper training, anxiety can lead to avoidance rather than mastery.
Without social-emotional training, the inevitable experience of being bullied – even if it’s just being teased for being spectacled, Asian, short, sporting large ears or noses – may lead to devastation, self degradation, more avoidance, and a life of withdrawal because the experiences are internalized. Children are unable to decipher what the bullying experience really is: Someone attempting to put another person down to feel better about self. Children need to be taught to detach appropriately from the behavior of others.  That is, to own what is theirs, but never the bad behavior of other people. Again, they will not necessarily learn this simply by living life.
And obsessions? Addictions? Compulsive behavior? There is help for your child, but without instruction and understanding, how many more young people will succumb to overdoses, illegal activities and wasted lives due to the addictive process?
But we can teach the seven C’s; we can foster social emotional skills. We have the knowledge, we’ve done the research. We know how humans heal. We can teach resilience. Or we can passively repeat the phrase, “That’s life”. 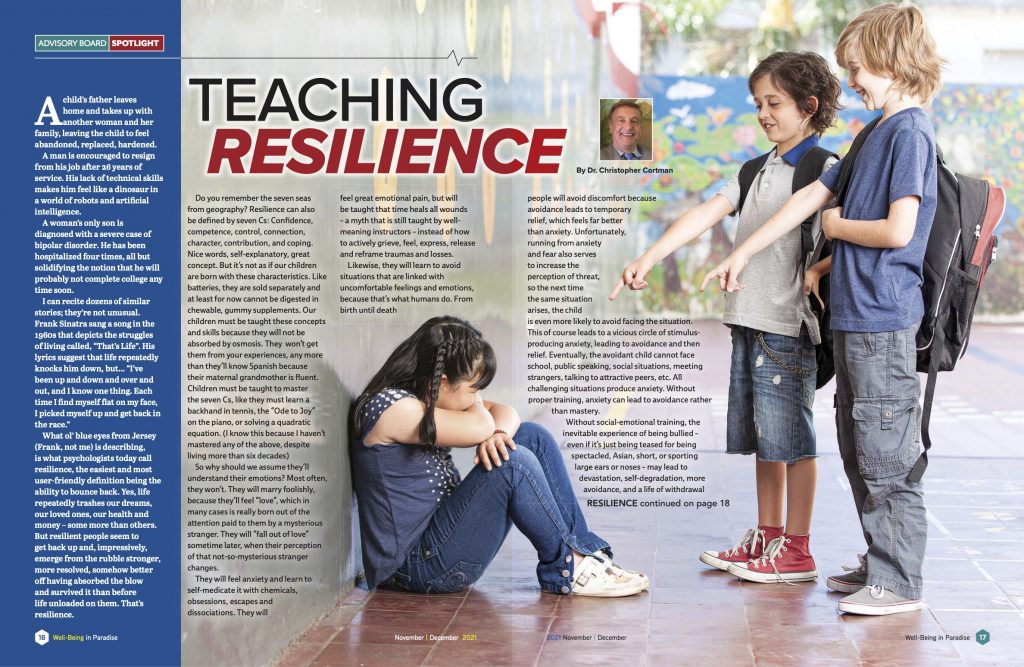