I have never been a big fan of horror movies, but I remember reluctantly joining my adolescent peers to the theater for the big feature, “Friday the 13th“. It was the first such movie, not to be confused with the 746 sequels. I don’t remember much of the nonexistent plot, except that a ticked off Jason returned to the summer camp -where he previously died -to exact revenge on the clueless campers.
Predictably, Jason whacked a number of irrational youngsters until finally he was overcome by the stars of the movie. A collective relief ensconced the theater, as Jason was dead (again). The music lightened, the birds chirped peacefully and the remaining campers navigated the shallow waters of the lake in a rowboat. They headed towards healing, and the hopes of a beautiful tomorrow, when shockingly, Jason‘s hand emerged from the lake to submerge the rowboat and once again sabotage the happiness of campers and moviegoers, alike.
Intentionally, that was my last horror movie, until the current episode of the mega-hit reality movie, “The Delta Variant”, coming to your house, instead of the closed theater near you. As in the movie, we had hope this spring that the year of suffering was finally over and the world would be reopening. Mercifully, Covid would stop killing us and people would no longer require masks, except superheroes and Jason.
But as you know, that didn’t happen. The infection rates are up, the intensive care units at capacity again and even the vaccinated are spreading the Delta like peanut butter. In worst cases, even the double – vaccinated are succumbing to the virus. As Mr. Rogers might ask, “Can you say disappointing? I’ll bet you can.”
The Bad
The stressors of the pandemic are well-known: social distancing, infection fears, inadequate and contradictory information, financial threats, an overwhelmed healthcare system (including burned out professionals), unemployment and the academic world turned upside down. Add to that the helplessness of watching family, friends and people all over the globe suffering and dying. Cumulatively, those stessors have exacted a toll on the human psyche.
What toll? At first we were told that the incidence of anxiety disorders, major depression and post traumatic stress disorder would be increasing at an alarming rate. Suicides would skyrocket, in addition to domestic violence, substance abuse and other self-destructive behaviors.
The Good
And while we had evidence of all of the above being true, at least early in the pandemic, recent polling and scientific research has revealed surprising and refreshing findings: humans, not just Americans, are remarkably resilient. According to a July 4, 2021 article written in the Atlantic (Aknin, Zaki and Dunn), a mental health task force was commissioned “To quantify the pandemic’s psychological effects”.
To be sure, there were groups of people experiencing significant and “life-changing suffering. However, looking at the global population on the whole, we were surprised not to find the prolonged misery we had expected”.
According to the authors, thousands of studies examined hundreds of thousands of people in over 100 countries, investigating depression, anxiety and suicides, both before and during the pandemic. Early in the pandemic, as noted, the data demonstrated that depression, anxiety and psychological distress climbed dramatically. For instance, reportedly depression tripled in the United States during March and April 2020 compared to the average in previous years.
But with the advent of summer, the levels of depression, anxiety and stress began to drop to pre-pandemic levels. Amazingly, “… looking at the world as a whole, we saw no trace of a decline in life satisfaction: people in 2020 rated their lives at a 5.75 on average, identical to the average in previous years“. Similarly, suicides actually decreased in the US.
So what to make of this research? For me, two important things: first,the effects of the pandemic should continue to be researched, collected and adhered to, in a global effort to champion the pandemic. Secondly, human resilience and social emotional skills should be studied and taught to humans from the second grade to the grave.
How do we teach resilience?
Tune in to the next issue’s article featuring RESILIENCE, without references to Friday the 13th. 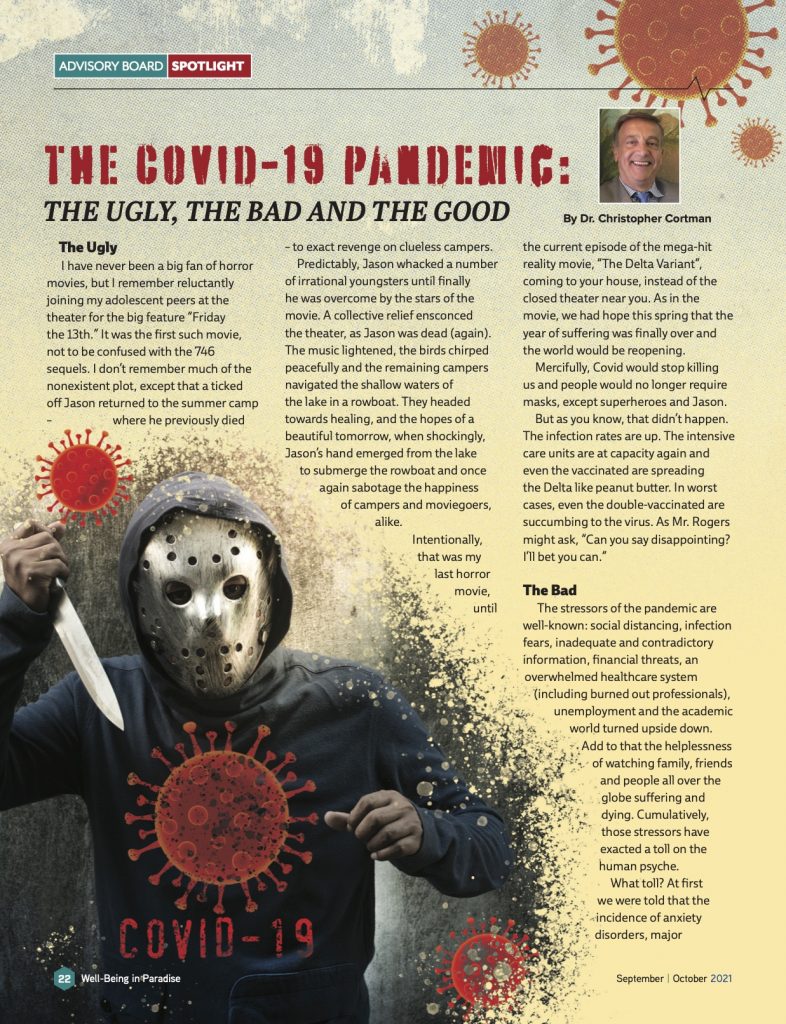 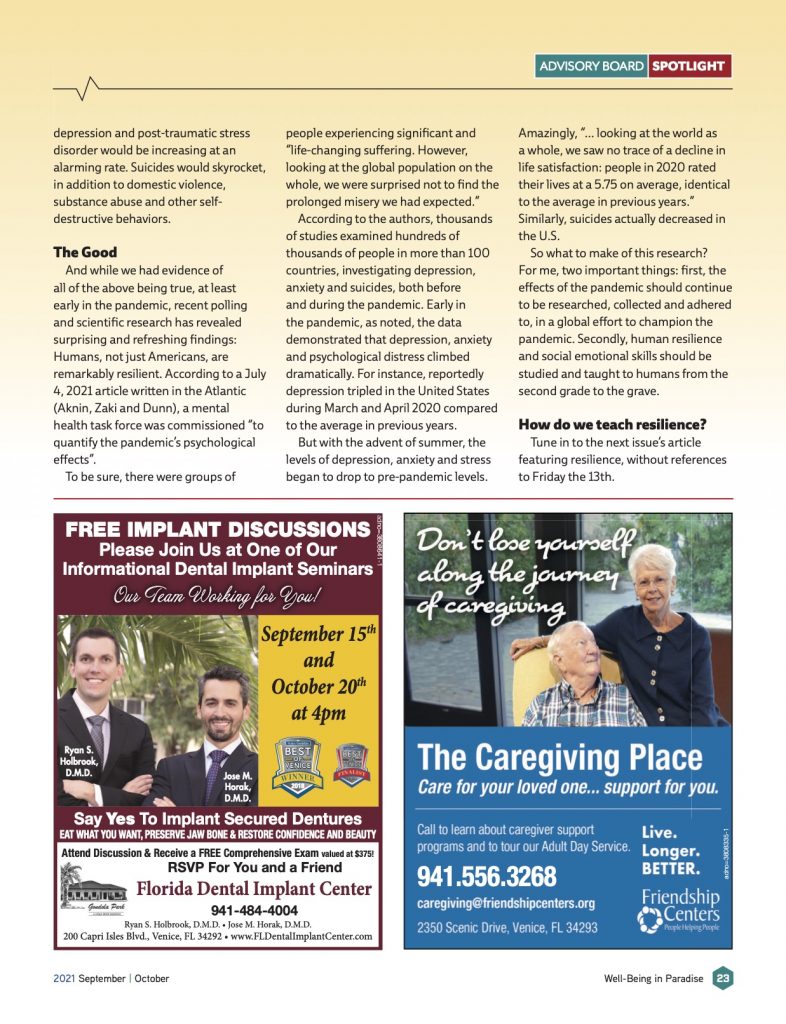